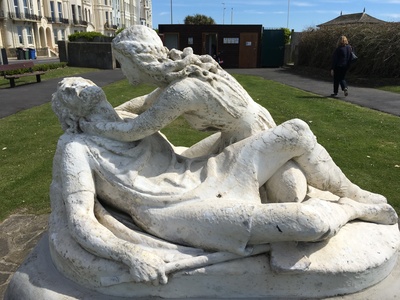 Future of the Harold & Edith Swan-Neck Statue – A Panel Discussion

In June 2016 author Iain Sinclair and artist, writer and filmmaker Andrew Kötting, walked with their followers from Waltham Abbey in Essex to St Leonards-on-Sea in Sussex as part of a pilgrimage in memory of Edith Swan-Neck. Edith was the high-born common-law wife of the Anglo-Saxon King Harold killed at the Battle of Hastings in 1066. The destination of the 5-day, 100 mile journey was the statue of Harold & Edith in West Marina Gardens, St Leonards: yards from the English Channel. The journey inspired Andrew Kötting’s film ‘Edith Walks’.
This important statue was created in 1875 by German sculptor Karl Augustus Heinrich Wilke and donated to the borough by Lord Brassey, MP for Hastings 1868-1886. The statue is open to the elements, in particular the corrosive sea air, and is in a sad state of disrepair.
A Panel will discuss whether the statue should be moved to a place less exposed to the sea air – and if so, where.
Panel members will be Tim Craven, former Curator of Art at Southampton City Art Gallery and artists Claudia De Grandi, Matthew Radford and Alan Rankle.
The Panel discussion will feature a contribution from Andrew Kötting together with selected excerpts from his film.
Following this, two short presentations will be made from the floor: one by Christopher Maxwell-Stewart, Chair of the Burtons’ St Leonards Society, who will argue for the statue’s removal to a more suitable locality, and the other by Ian Jarman, founder of the Campaign for a Roof over Edith (CARE).
The discussion is one of a series of events staged by the Burtons’ St Leonards Society: www.burtonsstleonardssociety.co.uk/
The Society’s aims are to encourage high standards of architecture and town planning in St Leonards-on-Sea, prevent unsympathetic development in the area and to stimulate public interest in the beauty, history and character of the area of St Leonards and its surroundings.

Alan Rankle is an artist whose work explores social and environmental issues informed by his interest in the evolution of landscape art.
Since his first exhibition at the Institute of Contemporary Arts London in 1973 while still a student at Goldsmiths College, he has worked variously in painting, video, photography, architectural intervention and curating, through a series of international exhibitions and
commissions.
Retrospective surveys of his work have been presented at Gallery Oldham in 2006 and Fondazione Stelline, Milan in 2010. Recent projects include curating the exhibition Axis: London Milano for Fabricca del Vapore in Milan and immersive installations for six suites at the Lowry Hotel, Manchester in collaboration with the designer Veronica Givone and AFK Architects. The Times reported that Jose Mourinho had stayed at the hotel in a luxury suite with “bold original works by the acclaimed artist Alan Rankle”
Andrew Kötting is an award winning artist, filmmaker and Professor of Time Based Media at UCA in Canterbury. After leaving school he worked as a scrap metal dealer and then a lumberjack in Scandinavia before returning to college to study Fine Art, graduating from The Slade in London. He made many short films, which were awarded prizes at international film festivals before making his idiosyncratic first feature film Gallivant (1996) a four month journey around the coast of Britain on which he was accompanied by his grandmother Gladys and daughter Eden. As well as the Paul Hamlyn Award he has been nominated for the Jarman Award three times.
Subsequent feature films include This Filthy Earth in 2001, Ivul in 2009, This is our Still Life in 2011, Swandown in 2012 and By Our Selves in 2015 (a collaboration with the writer Iain Sinclair and the actor Toby Jones). In 2016 he produced a new multi-media performance piece, Edith, which resulted in a feature-film, a book-work, a CD, an installation and several performances. His most recent feature film Lek And The Dogs was released by HOME throughout the UK and Ireland in summer 2018 and premiered at The London Film Festival.
He currently lives and works between Hastings on the south coast of England and Fougax-et-Barrineuf in the French Pyrenees.
“There is no one quite like Andrew Kötting working in British cinema today. Actually, there’s no one quite like Andrew Kötting in cinema anywhere. He’s a one-man awkward squad, a restless energy-magician who makes other film makers, arthouse or mainstream, seem like lily-livered dilettantes”
★★★★★ Sunday Telegraph
www.andrewkotting.com

Claudia De Grandi is a transnational artist concerned with how artists address identity and the modern mind. She grew up in São Paulo with a Brazilian mother and Italian father and has lived in Britain for over 20 years.
Her work is a distillation of meticulous study and controlled thought inspired by music and meditation. Music, or ‘arte superior’ as Claudia describes it, is the basis for her art. She was classically trained at the piano at a São Paolo conservatoire where she first realised that music could be an abstraction. She carried these ideas with her when she studied fine art at University of Greenwich and gained a Masters in Transnational Art at the University of the Arts London.
Matthew Radford is a visual artist who graduated from Camberwell School of Art in 1970. He has shown at galleries worldwide, including the Hayward and Tate St Ives in the UK, the Drawing Center in New York and the Cat Street Gallery in Hong Kong. He lives in Blackheath, South London.
Tim Craven
After training in fine art and the conservation of paintings, Craven joined the staff of Southampton City Art Gallery in 1980 and worked there for 37 years: first as a Conservation Assistant, then Conservator and latterly, Curator.
As Conservator, he upgraded all the equipment and ensured visits to colleagues in the National Galleries kept the Gallery in the forefront of new thinking about restoration and scientific research. Then when the Gallery needed a Curator, he stepped up to the plate and developed his skills to undertake an entirely new profession.

He developed the Gallery’s collection wisely and well; inheriting an art collection of international renown of rising young stars and rounded out the groups of 20th and 21st century work to create a historical record of unrivalled depth in any British Gallery. His great coups were to buy a Bridget Riley and to ferret out so many British Surrealist works.