VB Crake and his contribution to the heritage of St Leonards

In a talk on Sunday 22 March under the auspices of the Burtons’ St Leonards Society, Christopher Maxwell-Stewart will throw light on Vandeleur Benjamin Crake, who followed in the footsteps of the Burtons with his contributions to the architectural and cultural heritage of St Leonards.

Vandeleur Benjamin Crake (1816-1894) was the foremost member of the Crake family, who made major contributions to the architectural and cultural heritage of St Leonards and its environs in the later decades of the 19th century. The Scottish Baronial Highlands Gardens beside the Archery Ground are his most obvious bequest to our built environment.

Of equal importance architecturally are the “Arts and Crafts” residences in nearby Boscobel Road which he commissioned Philip Tree to design. 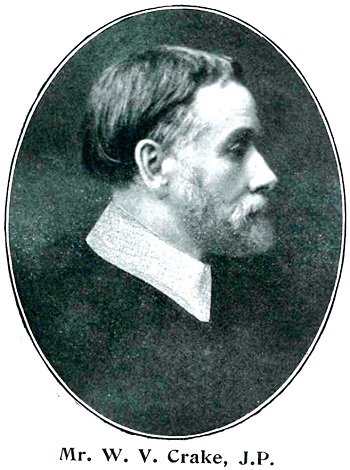 William Vandaleur Crake, who is thought to have inherited the Highlands estate from his father, Vandaleur Benjamin.

Crake’s life was a contrast of great sadnesses and wonderful friendships, most notably with Edward Lear. His siblings and sons contributed to his achievements – his son William Vandaleur apparently inherited the Highlands estate when his father died and is thought to have continued work on it. He was also instrumental in founding Hastings museum, according to local historian Kent Barker.

The illustrated talk will be given by Christopher Maxwell-Stewart, who has been resident in St Leonards since 1946. A founding trustee of the Burtons’ St Leonards Society in 1967, in recent years he has pursued research into the development of St Leonards beyond the Burton Estate.

The society has also contributed information to an essay on The Crakes of St Leonards by Barker, which will appear in the April edition of Bygones, the magazine of the Hastings Local History Group.