Organised by Hastings & St. Leonards Society, as part of our ‘West Hill (Hastings) Local Heritage Project’, the West Hill Community Festival took place over the weekend of Friday 20 to Sunday 22 September. All events were free, as the project has been funded by a ‘Sharing Heritage in the Community’ grant from the National Lottery Heritage Fund. 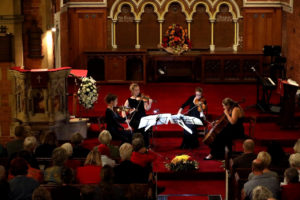 The Festival opened with a special concert at Emmanuel Church on the Friday evening. This was by the highly-regarded Benyounes Quartet, who performed string quartets by Haydn, Mendelssohn and Debussy. All the 200 free tickets were taken up and the concert was enjoyed by all who attended. The quartet also said they enjoyed playing at the church, which was a very suitable venue for them to peform in. They had their latest CD ‘Innovators’ on sale at the concert. H & St. L Society provided the refreshments for the interval. 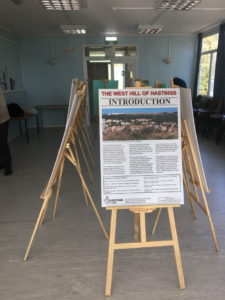 Road) on both Saturday and Sunday of the Festival. It is estimated that about 200 locals viewed the extensive exhibition (18 A1-sized boards in total), which was deemed very interesting, well researched and designed. The Society is also conducting oral history recordings as part of the project, and some of these were played at the Centre during the exhibition.

On the Saturday there were performances at the Community Centre by ‘Pulse’ children’s dancing group, and ‘Two Towers handbell ringers’. 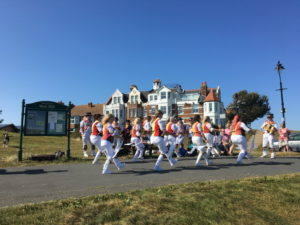 Both were highly entertaining. Outside the West Hill café, in lovely autumn sunshine, Mad Jack’s and Fishbone Ash morris sides danced, with Section Five Drummers playing in-between the morris dancing sessions. It just wouldn’t be a Hastings festival without those very popular acts performing! There was a gazebo near the café in which the only known remaining Hastings Town Gun (small cannon) was on display with two information boards. The town guns used to be fired on the West Hill on royal occasions such as coronations, births and visits to the town. These ceased early in the twentieth century. The town gun 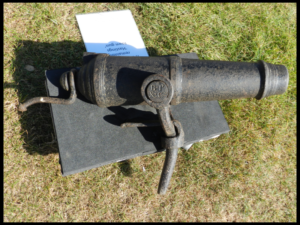 was provided by Hastings Museum for the day.

A very welcome character adding to the variety of events during the Festival was ‘Happy Harold’, the Hastings vintage trolleybus. Now 91 years old, the recently rejuvenated ‘Happy Harold’, overhauled and repainted in 2018, gave passengers of all ages rides around the local area, with the open top deck 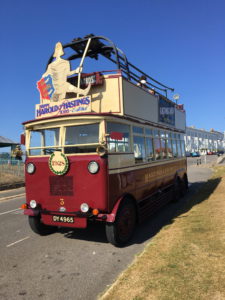 being favoured in the sunshine.

The weather was overcast with frequent showers on the Sunday. However, the rain held off for the guided heritage trail walk in the morning. H & St. L Society’s secretary, Steven, who is lead for the West Hill Local Heritage and Community Festival project, led the walk, drawing attention to the many points of interest in the West Hill area, from the Ladies’ Parlour northwards to Emmanuel Church, and detailing the residential development of the area from the 1850s to the early 1900s.

Showers on Sunday afternoon did not prevent the Brighton Kite Flyers

displaying some of their large kites. There was a maritime theme to the display, with octopus, crab, shark, whale and lobster featuring amongst other large and colourful kites, which were anchored to the display team’s vehicles. Walkers on the West Hill recreation grounds stood astounded by the kites and took many photographs. The kites were also observed by people on Hastings seafront, looking up to the West Hill with curiosity. The display lasted for 1 ½ hours.

The Festival closed with a story-telling event at the District Community Centre. Sarah Corrie read from her new book, The Keeper of Hearts, and this was followed by a book signing.

Immediate positive feedback from the many people who attended the events over the weekend indicates that the West Hill Community Festival was a great success. The local heritage research project continues until March 2020, when a free booklet (limited number) will be published, extending the work shown in the exhibition, and an archive is to be deposited with Hastings Public Library. Further oral history recordings will be made during the remaining period of the project. People who have items of interest to share with the Society for the local history research, or would like to make recordings of their reminiscences of life in the West Hill (Hastings) area, are encouraged to contact H & St. L Society. Please e-mail hstlsoc@gmail.com and mark subject as ‘West Hill Project’.